In order to know when to evacuate for hurricane surge flooding, you must KNOW YOUR ZONE!

The greatest killer of people during hurricanes is storm surge – the dome of water pushed ashore by powerful hurricane winds. Entire buildings can be moved, and can cause more damage than the winds of a hurricane itself. Florida is extremely vulnerable to surge flooding because of its coastal and low-lying geography.

To stay safe from surge flooding, if you live in a zone that has been ordered to evacuate, get out. The best way to be prepared for a hurricane storm surge is to know your evacuation zone and plan your destination and travel routes ahead of time.

Know Your Zone - search by address to determine if you are in a designated evacuation zone.

Maps - access a map for those counties with designated evacuation zones.

Evacuation orders are often issued for "low-lying areas". There are no maps to designate these areas. However, there are designated Flood Zones.

Evacuation orders are not generally made using flood zone designations. However, those in flood zones should consider themselves in "low-lying areas" and susceptible to flooding from storm surge in coastal areas and heavy rain as well. 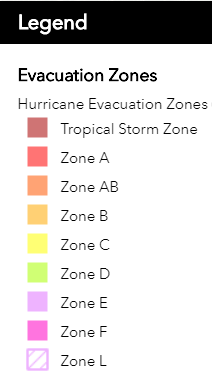 ...Typical Summer Day Expected for Florida...Scattered Showers and Thunderstorms Nearly Statewide...Thunderstorms Most Likely to Be Ongoing During 4th of July Fireworks Along the I-75 Corridor This Evening...A Few Thunderstorms May Be Strong...Localized Flooding Concern for the Panhandle...Triple Digit Heat Indices for Northeast Florida and Peninsula...Elevated Rip Current Risk Along Most Panhandle and East Coast Beaches...No Tropical Development Expected Over the Next 5 Days...