What Makes a Severe Thunderstorm?

Of the estimated 100,000 thunderstorms that occur each year in the United States, about 10% are classified as severe. The National Weather Service considers a thunderstorm severe if it produces hail the size of a U.S. quarter or larger or winds of 58 mph or stronger. Severe thunderstorms are known to cause significant damage to well-built structures or cause bodily harm. These strong storms can also produce frequent and dangerous lightning, flooding and tornadoes.

Where Are Thunderstorms Likely to Occur? 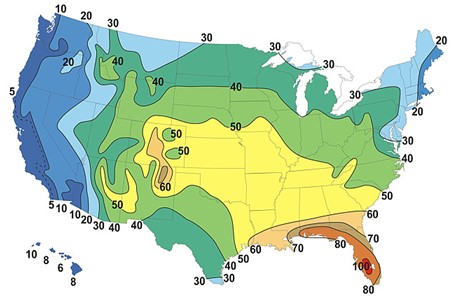 In the United States, there are an estimated 25 million lightning flashes each year. In an average year, Florida sees around 1.4 million of these lightning strikes. This makes Florida the "Lightning Capital of the United States." Lightning occurs with every thunderstorm. Because of Florida's vulnerability to thunderstorms and lightning, lightning is one of the most deadly weather hazards in the Sunshine State.

How Far Away is Lightning?

In order to tell how close a lightning strike is, count the seconds between the lightning flash and the resulting thunder. For every five seconds you count, lightning is one mile away. A good rule of thumb with regards to lightning safety is to remember that if you can hear thunder, you are close enough to be struck by lightning. Even if it is not raining where you are, lightning can still reach you. Lightning can travel as far as 10 miles away from its thunderstorm, and has been observed as far as 25 miles away. This is why the best thing you can do when you see lightning is seek safe shelter as soon as possible.

Where Can You Go For Up-To-Date Info?

Severe Thunderstorm Watch - Issued by the Storm Prediction Center to alert the public that conditions are favorable for the development of severe thunderstorms in and close to the watch area. These watches are issued with information concerning the watch area and the length of time they are in effect. During the watch, people should review severe thunderstorm safety rules and be prepared to move a place of safety if threatening weather approaches.

Severe Thunderstorm Warning - Issued by local National Weather Service offices to warn the public that a severe thunderstorm has been sighted by storm spotters or has been indicated by radar. People in the affected area should seek safe shelter immediately.

What Actions Should You Take To Be Prepared?

...Scattered Showers and Thunderstorms Develop This Afternoon Across the Central and Southern Peninsula...Lower Rain Chances Continue Across the Panhandle...A Few Thunderstorms May Be Strong and Capable of Producing Gusty Winds, Lightning, and Locally Heavy Rainfall...Localized Flooding Possible for Low-Lying and Poor Drainage Areas...Monitoring Tropical Storm Ian Over the Central Caribbean...Strengthening is Expected Over the Northwestern Caribbean and Eastern Gulf of Mexico...Ian to Become a Hurricane Sunday, With Rain and Wind Impacts Beginning Across the Florida Keys Late Monday or Tuesday Morning...